Day 2 at the NCM17 started, again, with Oxford Nanopore CEO Gordon Sanghera taking the stage, once again stating his dream that sequencing should be available to anybody, anytime, anywhere. There are currently around 12,500 mainframe DNA sequencers around the globe, a number he believes will be passed by ONT in a not too distant future. The availability of portable sequencers to the masses will change the way we sequence DNA (the sequencing singularity?), not to mention all the ethics involved in sequencing the genomes of everyone – a topic which was also discussed in a panel discussion. It will undoubtedly improve our understanding of diversity on our planet.

Arwyn Edwards employs Gordon’s motto in his work as he, in his own words, sequences in strange places. One example of such is a field trip to an old coal mine in Wales, where risks were high due to methane gasses. Although plugging in all equipment over ground to avoid sparks in the explosive environment, he still had a battery powered centrifuge blow up in a blue flame. Nevertheless, the team managed to get some reads out of the run, even though the input material was a mere 3×6 ng DNA! Other field trips have included Greenland to investigate microbial darkening and to Svalbard to monitor microbial populations in the melting Arctic ice. He has also been testing the new lyophilised reagents and found results coherent with other kits and Illumina sequencing. It is important to note however, that all methods have biases, all databases are incomplete and all extraction methods have problems. We need to address these issues before we can go out and sequence metagenomes in the field.

Continuing this subject was Mads Albertsen, my PI, who had a clear message of what we need – more genomes! There are some problems in recovering genomes from metagenomes though; Microdiversity in samples and separation of the genomes (binning). His approach is to use differential coverage, so binning can be performed by abundance. This is something that can, sometimes, be done with Illumina reads only, but hybrid assemblies with long Nanopore reads is simplifying this. Mads believes it won’t be long before we can beat evolution in speed and sequence everything! If you want to do metagenomes with differential coverage binning, check out our mmgenome R package.

It has been a great community meeting (my first!) with plenty of activity in the demonstration zone and flow cell loading workshop. 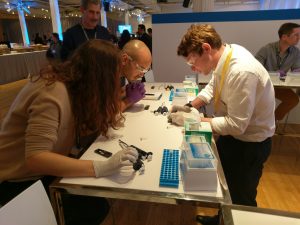