We start out with blazing punk rock (things are never too boring at Oxford Nanopore meetings) and plenty of promises from Oxford Nanopore CEO Gordon Sanghera. He gave us updates on various products, such as PromethION flow cells, which have been harder to produce than expected. However, we and others have now sequenced data on the PromethION! Yes, not the 50 gbp as Oxford Nanopore claim to be able to achive in-house. But we start to be much more optimistic than we have ever been! The VolTRAX should be working now and a second version was announced! The second version will have a fluorescent detector built in for quantification and it will be possible to load the prepped sample directly onto a flow cell. The second version will be released in the first half of 2018. 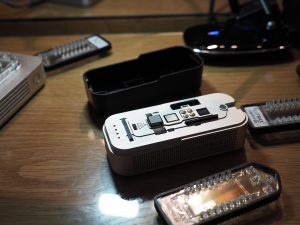 The much-anticipated 128-channel Flongle will be available in the second half of 2018. We are looking forward to fast and cheap sequencing the field and laboratory – although a MinION flowcell is relatively cheap (approx 500 USD) it is still way too expensive for regular use in many applications where we do not need Gbps of data. Gordon Sanghera highlighted that they are currently also moving the flongle into the diagnostic field. The sky seems to be the limits for small, cheap and generic diagnostic kits.

Oxford Nanopore has realised that data yield on flow cells depends largely on extraction and library preparation techniques and have started focusing more on this. Automation of everything from extraction to library prep would be ideal, but no updates were given on Zumbador other than the fact that a lot of work remains to be done. Along these lines, Lyophilised reagents have been sent to a selected few for initial trials, and removing the cold chain will be a large step forward to enable sequencing anywhere. Furthermore the new mobile FPGA base-caller was shown and it will be up to the community to name the unit in a competition – use the #NanoporeAnyone tag! The SmidgION and the mobile basecaller was displayed in the demonstration area and look very fancy:

Nick Loman was up first and gave us an outlook on what we will be able to achieve with sequencing in the future. Based on the sequencing of Ebola in West Africa he showed a video of how the disease had spread and infected different regions. By using real-time genome sequencing we will be able to track diseases as they develop and although outbreaks will happen – we should be able to avoid epidemics.

This sequencing singularity, as he termed it, is however dependent on sequencing genomes instead of genes, as is standard today. Long reads will make this possible as they can often cover repeat locations in the genomes. The long reads will also mean that much less compute power is needed. An example was given with an E. coli sample, where an assembly was produced in miniasm in 1.5 seconds, producing a single contig with 8 reads (Now that Nick and his team lost the world record of the longest sequenced read, the still claims the world record of assembling E.coli with the fewest number of reads).

Sergey Koren continued in a related subject, talking about how we may be able to finally close the human genome. He showed very convincing results on integrating Hi-C with long-read Nanopore data, see their new tool SALSA and their related paper here. Combining Nanopore and Illumina reads in hybrid assemblies is the preferred way to get the desired accuracy and read length, which was also the theme of Ryan Wick’s talk. He brought up some shortcomings of assemblers and stated that all genomes are somewhat metagenomes because of variation. What should assemblers do when encountering these differences? There is a need for more variation-aware assemblers and more graph-friendly tools.

The diversity of life on Earth has always been tricky to study. Steven Salzberg addressed this in his talk about closing large genomes. Even with long reads you need bioinformagic to assemble the wheat genome, which is 16 Gbp long and full of repetitive transposon regions. The fact that it has taken 8-9 months of sequencing, 1 trillion bases sequenced on Illumina and 545 billion bases sequenced on Pacbio is a good indicator of how difficult it, still, is to close these genomes. And it is still not closed, but a lot closer to than before!

The evening speaker, Aaron Pomerantz, gave us a great presentation about his trip to the Ecuadorian rainforest with a mobile lab. The development of portable sequencing has the potential to give us bigger insights into the diversity in remote areas. Often samples have to be shipped halfway around the globe to be sequenced, adding further expenses and time to the workflow.