(This post is the first in a small series compiled during my visit to Segata Lab in Trento, Italy)

A provocative title I know, but as a young scientist venturing into the field of microbiology my concern about this is increasing to the point of now writing this blogpost. Sequencing data are inherently relative [Lovén et al., 2012; Gloor et al., 2017], because there is a maximum read capacity of every sequencing run. However, correlating relative data is like comparing bananas and apples – and although everyone does it – it makes little sense (In the vast majority of cases). Consider the plot from Vandeputte et al. [2017] shown below:

Figure 1: Figure 2 redrawn from Vandeputte et al. [2017]. The composition of 40 microbiomes was analysed using 16S amplicon sequencing, with colours representing different genera. Shown in (a) are the relative abundances which is quantitative output after sequencing. The authors simultanous quantified the cell numbers for each sample, which enabled them to rescale each sample according to the cell count and perform quantitative profiling as shown in (b).

The authors did 16S sequencing and were simultaneously able to estimate the absolutte quantities of bacteria in their samples. This way they could compare the relative quantification (figure 1a) with the absolute quantification (figure 1b), which substantially influenced their results. By sequencing alone we only get the relative information – we don’t know if there is a 6-fold range in the number of bacteria as in the study by Vandeputte and colleagues. Here most of the bacteria are reduced in absolute quantities from left to right (figure 1b), but the relative data shows bacteria that are constant, decreasing and increasing in all kinds of spurious relations (figure 1a).

I will give an intuitive argument about why correlation of relative data is problematic, very much inspired by this post. Let’s start with the relative abundance of two bacteria measured by e.g 16S rRNA gene amplicon sequencing;

. Since they are relative they have to sum to a constant:

must go in the opposite direction with no room to vary: their correlation is a perfect -1. If we introduce a third bacteria

But wait a minute…

This is not the end of it, by far. The above example is highly idealized and assumes all bacteria to be independent and identically distributed, which is not true in real data as figure 1
exemplifies. In reality, bacterial abundance exists on multiple levels, often with few dominating bacteria and a long tail of low-abundant ones. Additionally, intricate correlations between different bacteria are commonplace for biological reasons. Under these circumstances our idealized view simply does not cut it. Contrary, there seems to be a overrepresentation of negative correlations in real data [Lovell et al., 2015]. Perhaps more disturbing, the correlation of relative data tells nothing about the correlation of the underlying absolute values. This is perfectly illustrated in figure 2 from a very nice publication by Lovell et al. [2015]: 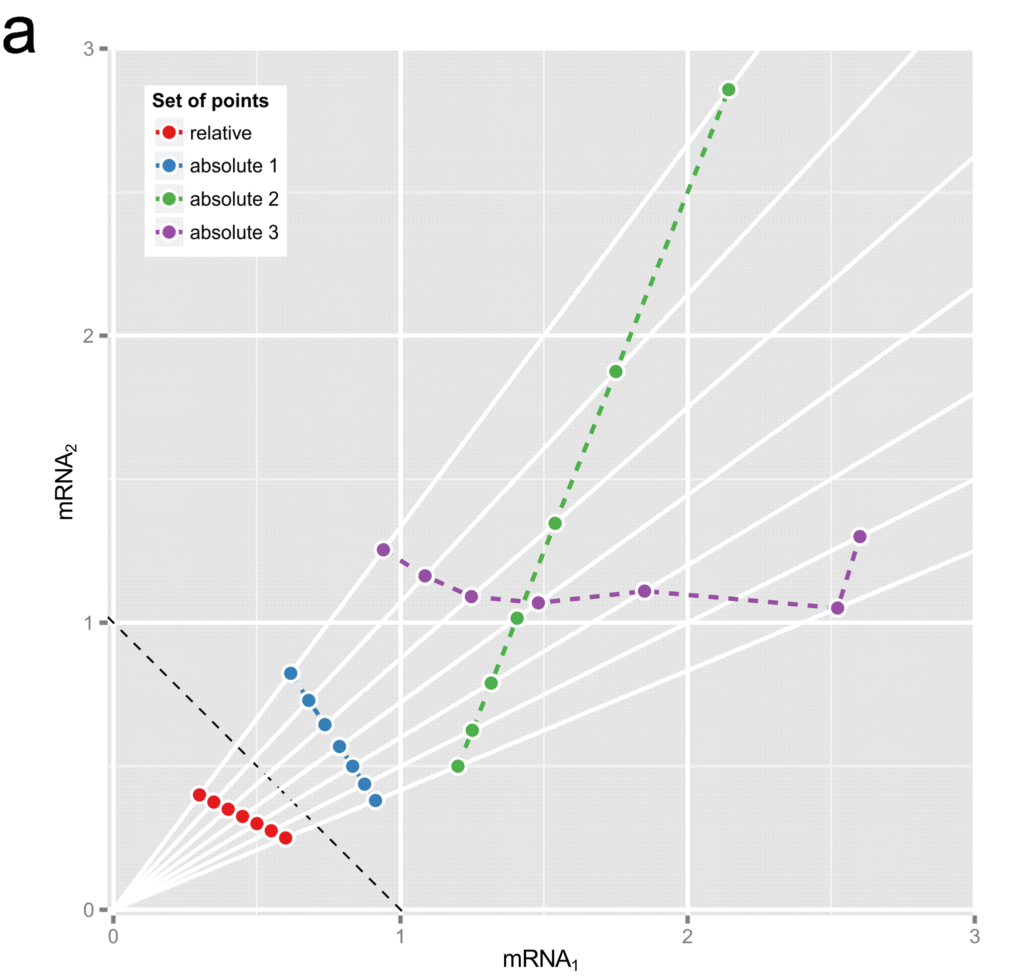 Figure 2: Figure 1A redrawn from Lovell et al.  [2015]. The relative abundances for two hypothetical mRNAs across seven samples are shown in red in the lower left corner. The three sets of blue, green and purple points are absolute abundances that corresponds to the observed relative abundances with correlation coefficients of -1,1, and 0, respectively.

The plot shows the relation between two mRNAs across seven samples. The lower-left corner with the red dots is what we can observe when looking at the relative values, constrained by the dotted black line because the relative values cannot sum to more than 1 (i.e. 100%). Each line extending from the origin and through a red dot is all combinations of mRNA1 and mRNA2 that could give rise to the observed relative abundance. For example, if we have mRNA1 = 5 and mRNA2 = 10 and a total of 100 reads their relative abundances are 5% and 10%. But, if we sequenced twice as deep to 200 reads we would get 10 and 20 reads for mRNA1 and mRNA2 respectively, although the relative abundances are the same. If we imagine a “continuum of sequencing depths” in our mind we can trace out the white lines in figure 2 for each sample. If we then switch to the absolute values we get the main point: for each line we can put the real absolute value anywhere on the line we want, which is what Lovell and colleagues did for three sets of points (blue, green and purple). Thus, the same correlation of relative abundances can originate from arbitrary absolute correlations. So not only are the correlations inherently negative, they are also completely arbitrary! Check out the paper by Lovell and colleagues for all the nice details and their results when applying this on real data. In addition they also raise questions about the interpretation of differential expression analysis in the context of this problem.

But we are not all lost

I would argue that most scientist working with sequencing data know about this problem. But it is often circumvented by the ubiquitous assumption that the amount of input material is the same across all samples [Lovén et al., 2012; Lovell et al., 2015]. If that is true, the relative and absolute quantification are proportional across samples and we will not find discrepancies between the relative and absolute quantification. This is a very, very strong assumption! I will not go into details how this assumption can be violated, but many systems under study are constantly changing and heterogeneous.  Given the complexity of microbial communities and their interactions this at least requires verification. And it is rarely done or required by the scientific community in general.

We can do other things with the data besides correlation. Compositional data, which is the statistical term for relative data, can be analysed by instead looking at ratios [Aitchison, 1982]. This is because ratios are invariant (i.e. unaffected) to scaling:

This is exactly what happens with compositional data, in the case of sequencing data

is the total abundance for the sample. A common starting point for analysis is to quantify how much this ratio varies across samples based on the logratio variance [Aitchison, 1982]:

can be interpreted as the proportionality of

close to zero means that

are proportional, i.e. “synchronized” with a constant multiplication factor across samples. Contrary, large

have different multiplication factors across samples. This

gives a great intuitive understanding of the concept, but is not directly used for calculating proportionality [Lovell et al., 2015; Quiin et al., 2017]. Instead, the

-statistic can be used, which conceptualize the logratio variance in a statistical framework. The exact formulation is too technical for the purpose of this blogpost – I encurage you to the read the papers!

The propr package [Quiin et al., 2017] implements the calculations of the

-statistic. I’ve wrapped some of the functionality in in my own function mt_phi for streamlined processing, which is included in my mmtravis package for transcriptomics data analysis. This function allows you to input a

matrix of relative abundances and output a

matrix of the calculated

-statistic for each gene pair. This matrix can then be used for downstream analysis, such as clustering analysis, heatmap visualization etc. Let’s compare the proportionality and correlation matrices using some of my own transcriptomics data. You can find the code and data here. First we load the data:

The data consists of some 2224 genes measured across 10 timepoints. Before we can analyse the data we need to transform it from raw counts into relative abundances. For this purpose I use transcripts per million (TPM) [Wagner et al., 2012]. Prior to this I also subset to genes with > 50 reads across all samples, to remove noisy genes.

Now we can compute the

– and correlation-matrices into distance objects and do hierarchical clustering.

Finally we can visualize the clusterings by drawing heatmaps shown in figure 3. 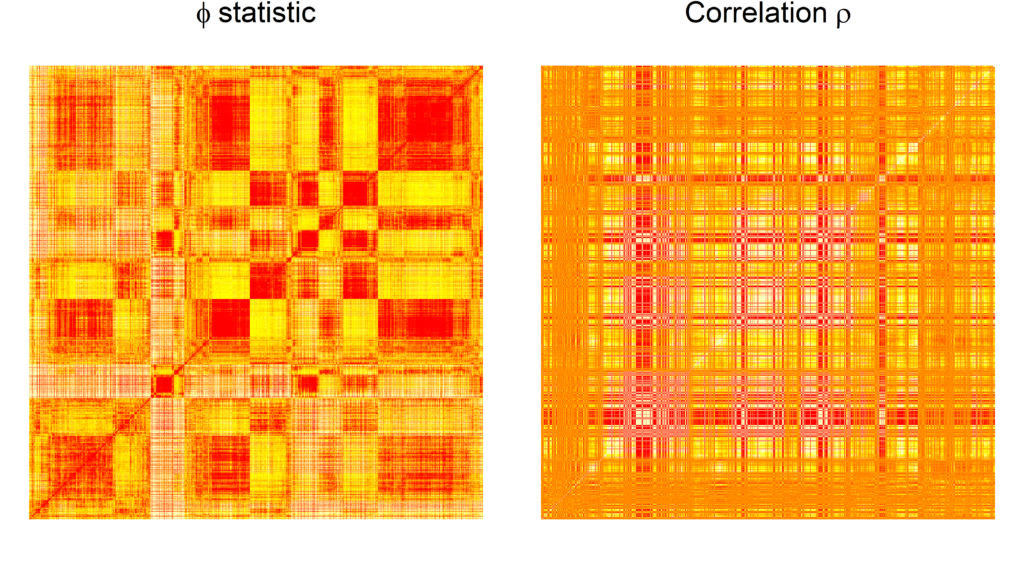 Figure 3: Clustered heatmap of all genes based on the proportionality calculated using the

Note how different the two matrices in figure 3 are! The

-statistic seems to yield tight clusteres of various sizes, while the correlation-based matrix is highly segmented into small clusters, with sets of genes that seem to be strongly correlated with almost all other genes, evident by all the vertical and horizontal red lines. This simple visualization is not enough for real conclusions, but the

-matrix seems to have a more “biological” topology in concordance with what one may expect – cluster of genes of various sizes that are up- or downregulated together. In contrary, the clustering based on correlation seems more homogenous suggesting that  noise from spurious correlations are dominating. From here the

statistic could be used for further analysis, such as pathway enrichment, network analysis etc.

I have only scratched the surface on this topic and other approaches to handle issues with relative data exists [Pawlowsky-Glahn and Buccianti, 2011; Faust et al., 2012; Friedman and Alm, 2012; Knight et al., 2018]. The concepts of proportionality and comparing ratios are relatively easy to understand but might at first be hard to interpret. The concept of correlation is hardwired into any scientist and facing new concepts will require rewiring, additional theoretical studies, and use-case examples to establish guidelines for interpretation. But that being said we should not rely on measures that in many cases are plain wrong, or just blindly trust our assumptions to hold true. Either you validate your assumptions to be true or you adapt your analysis to the constraints of the data. The former will always be problematic, therefore I believe proportionality provides a meaningful path forward analyzing sequencing data and compositional data in general.

You can download the R script and data used to generate figure 3 here.

PhD student
Wandering the greyzone between microbiology and biostatistics, where I develop novel methods to analyze “omics”-data from microbial ecosystems.